People have heard God speaking in the clouds,
or in the rushing wind, or in bells.
I hear the same thing in the drums, the drums of all the nations beating together,
struck with such power by the Pacifists.
Eyes closed and long hair waving free,
the drummers seem transported on idealist dreams.
Their hopes fixed inwardly on the great realm of the sublime,
they reach for Heaven on Earth.

God says so much in the mighty pounding of the drums,
which shakes the ground.
What a great force the hopes and dreams of those who wear the tie-dyed cloth,
who lift the peace banners so high.
Isn’t it they who represent some of the best man has achieved?
Aren’t their beliefs of universal brotherhood exactly those that Jesus preached?
“Brother” and “Sister” are the names we know each other by in Paradise,
not by the titles and the ranks of the Machine. 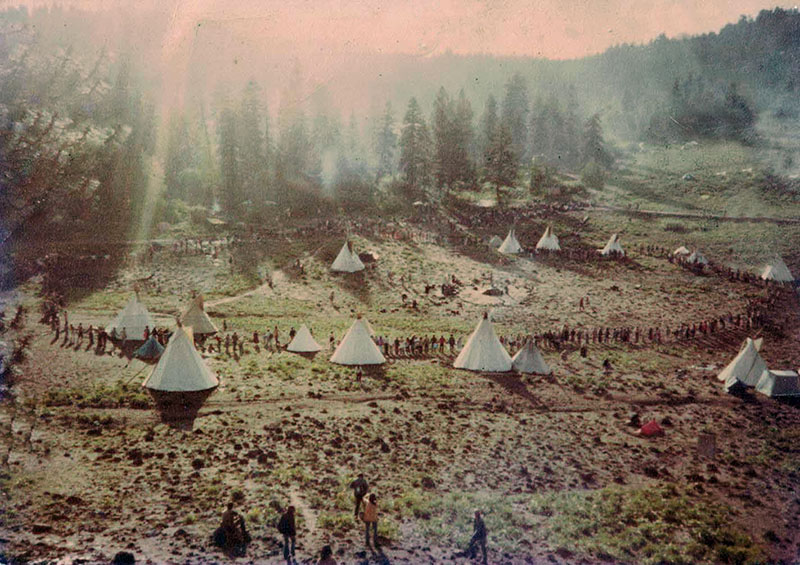 The strong hands of the drummers never tire, pounding out the heartbeat of a great people.
The sound of swords turned into plowshares is their happy song.
Gone are the slaughter   and destruction when Christ in us is come.
Ages of ignorance and lies are soon dispelled when the Holy Word of “Love” is formed.
These people don’t believe in war,
and want to put the Golden Rule to strong political effect.
“Respect” is the sole dogma to which they cleave,
and the co-operation of civilized folks with common sense.

Christ’s Paradise is not so far when hearts embrace a love for all,
and visions of hope and healing of the Earth.
Treating others the way they’d like to be treated is the litmus test of their religion,
which has no walls and doesn’t fit in books.
God tells me in the drums that their gentle ways can move mountains of greed and hate,
trying at last what Jesus really taught.
They are the cornerstone which the builders cast off
and what is written in their hearts is greater than the brute force of the world.


“…and they shall beat their swords into plowshares, and their spears into pruning hooks, nation shall not lift up a sword against nation, neither shall they learn war any more. But they shall sit every man under his vine and under his fig tree, and none shall make them afraid, for the mouth of the Lord of hosts hath spoken it.” Micah 4:3-4