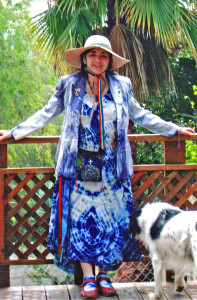 During the Sixties and Seventies, Joan Rivard lived in cabins in Alaska and also travelled throughout Europe and the U.S.  At that time, young people everywhere were adopting fresh ideas, growing their hair long, trying to get by in an environment that was increasingly artificial and unnatural.  Their efforts to fix the world seemed to her to express the same things taught by the Prince of Peace, whose hairstyle they copied.  Her book, Peace Drums – True Stories of Alaska from the Black and Silver Cabin, takes you inside their snug cabins and hovels where some of them lived for  free in the woods near the University of Alaska. 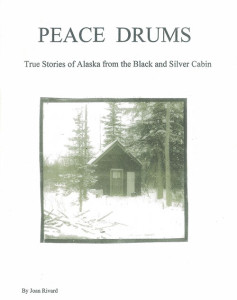 Joan has attended dozens of anti-war and pro-environmental demonstrations, has helped put on free rock concerts and gatherings and large rallies.  She has sent political poems from her book, Hope America; The Right is Wrong, to legislators in grass-roots efforts which she calls “political art.”  She sent a telegram to a Pope asking him not to support pro-war candidates with the pro-life stance.  Shortly afterward, the Pope sent out a cyclical letter urging all bishops to support peace.    Joan also used her writing to swing a vote at the L.A. City Council to oppose the Iraq war. 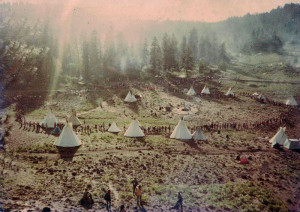 She has been to ten Rainbow Gatherings, another public expression of what has been called “the counterculture.”  These are week-long yearly peace events in the wilderness with twenty to forty thousand people.  There are no leaders, it costs no money, and everyone sits down together to eat for free.  The spiritual power she felt there and in many other places has led her to believe  that the country’s solutions can be found in the Golden Rule and the Bill of Rights.  She believes the people should unite as Democrats to reform the laws, and that those who want to help could make a big impact by each registering a hundred voters. 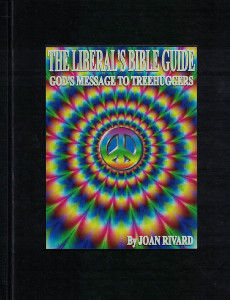 In studying the Bible she found, like so many others have, that the Apostle Paul taught the exact opposite of what the Bible says Jesus said.  Her book, The Liberal’s Bible Guide: God’s Message to Treehuggers, (480 pgs.) is an easy tool for anyone who wants to win arguments with those telling them they’re cursed sinners.  It is designed to be used as a fingertip guide to challenge not only cruel religious dogmas but also unfair economic policies.  Joan thinks it’s possible that knowing more about what Jesus really said and didn’t say, could make Pacifists and Liberals more politically powerful.

Joan Rivard was born in French-speaking Quebec, Canada on January 7, 1949.  She and her mother moved to Southern California in 1958.  In 1969 she graduated from Orange Coast College, then studied journalism and anthropology and psychology at the University of Alaska in Fairbanks.  In 1994-96 she completed all the courses for degrees in anthropology and criminal justice at Cal State, Los Angeles.

Joan is known to antique dealers at Southern California swap meets as The Cookie Lady, where she publicly shared her poetry and ideas for over twenty years.  Recently, she has been privileged to be a part of the historic drum circle in Golden Gate Park in San Francisco, located in the same meadow that hosted the Summer of Love.  This “Peace Drums,” blog is about her experiences there and at other drum circles as one of the musicians.  It also includes portions of her books which are soon to be released.

Joan Rivard can be contacted by email at:  joanrivard1776@gmail.com