Walking into Golden Gate Park I could already hear the drums.  The rhythmic sound echoed all across the meadow where so much had happened in the Sixties and was still happening.  Spectators watched as a motley group of over a dozen drummers, some of them strangers who’d never made music together before, performed in perfect synchrony.  They picked up on each other’s signals like trained musicians, with some inner, unexplained communication.  The people listening also seemed tuned in to the same force that moved the drummers’ hands. They too swayed and moved to the heartbeat sound.

It was more than entertainment, more than art.  The drummers were swept up by inner visions.  Half a dozen congas gleamed in the sun with their smooth fiberglass sides, and several hand-carved wooden Djembes.  A man kept a strong rhythm on his gorgeous drum, its smooth white top tied to its base with strings of cobalt blue.  A large beige drum resounded and vibrated.  There was a double-headed drum placed on a stand on its side, struck with sticks on either end.  Its ancient African design was held together with gleaming modern metal clasps.  There was a snare drum on a stand that a Native American played with drumsticks.  A homeless man played a white plastic bucket.

A beautiful stately woman played a gorgeous drum that was painted rose and gold with swirls and butterflies and suns.  She wore a dress with musical notes on it, silk flowers in her hair, and a small rhinestone tiara.  Comfortably installed on the park bench that was the focal point of the circle, it was obvious that she was an important member of the group.  She closed her eyes, her expert drumbeats setting the rhythm of the circle.

A young man struck with passion a drum he’d brought on a bicycle, carrying it on his back.  Another beat urgently on a drum that was a work of art, made of dark wood.  It had heaven-blue strings radiating around it.  It was decorated with brass studs at the base above a ring of what looked like carving around the bottom, but was actually a strip of recycled tire tread.  His hands were so damaged from drumming that he wrapped them with white adhesive tape around both palms and thumbs and around two fingers, on both hands.

Other instruments were brought, an electric keyboard with a generator that made the place sound like a church.  A cowbell hit with a drumstick made a bell-like sound.  There were also two long horns, about five feet long, the kind ancient religions used to call people to prayer.  Two men sitting on chairs blew into them with all their might, making an eerie, vibrant sound that was amplified with a portable amp.  One horn of ebony wood was decorated with a bracelet of semi-precious stones.  The other was made of something that looked like horn, wrapped with golden bands around the base.
The drummers played all day, until their hands were raw, taking short breaks. They played into the sunset when it started to get really cold, their fingers numb.  The young man packed up all his stuff and his big drum on the bicycle and started off across the field.  But then, unable to pull himself away, he came back.  He unpacked everything that he’d just carefully arranged, the drum, the 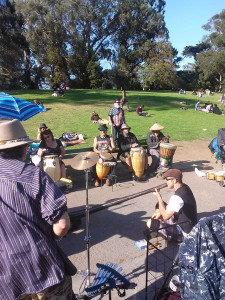 drum case, basket and backpack and his folding stool, and set them up again, and joined the circle like before.